Constitution Day 2018 Locking up our Own: Crime and Punishment in Black America 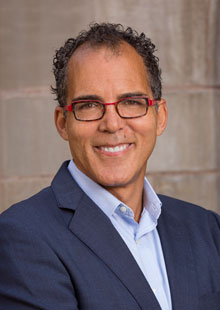 Pulitzer Prize winning author and Yale Law Professor, James Forman, Jr., will give this year's Constitution Day Lecture on his book, Locking up our own: Crime and Punishment in Black America. Professor Forman will be available for a book signing after the event.

James Forman Jr. is a Professor of Law at Yale Law School. He attended public schools in Detroit and New York City before graduating from the Atlanta Public Schools. After attending Brown University and Yale Law School, he worked as a law clerk for Judge William Norris of the Ninth Circuit Court of Appeals and Justice Sandra Day O’Connor of the U.S. Supreme Court.

After clerking, he joined the Public Defender Service in Washington, D.C., where for six years he represented both juveniles and adults charged with crimes.

During his time as a public defender, Professor Forman became frustrated with the lack of education and job training opportunities for his clients. So in 1997, along with David Domenici, he started the Maya Angelou Public Charter School, an alternative school for school dropouts and youth who had previously been arrested. A decade later, in 2007, Maya Angelou School expanded and agreed to run the school inside D.C.’s juvenile prison.

Professor Forman teaches and writes in the areas of criminal procedure and criminal law policy, constitutional law, juvenile justice, and education law and policy. His particular interests are schools, prisons, and police, and those institutions’ race and class dimensions. Professor Forman’s first book, Locking Up Our Own: Crime and Punishment in Black America, was on many top 10 lists, including the New York Times’ 10 Best Books of 2017, and was awarded the 2018 Pulitzer Prize for General Nonfiction.